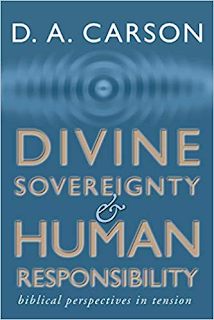 There are many other examples where Scripture affirms human responsibility for sin under the sovereign plan of God.

Genesis 50:20 describes the evil intent of Joseph’s brothers and God’s good intent in sending Joseph to Egypt as a slave.
Isaiah 10:5–15 describes God using the king of Assyria as his tool to punish Israel, at the same time the king of Assyria is wicked in his heart and is punished by God.
Proverbs 16:4–5 affirms that God has made everything for its purpose (including the wicked) and that the wicked are still responsible for their wickedness and will not go unpunished (cf. 1 Pet 2:7–8).
Luke 22:22 describes the betrayal of Jesus that was predetermined by God, yet Judas is still responsible for the act of betrayal.
Acts 4:27–28 affirms that the crucifixion took place according to God’s decree, yet the wicked men involved are responsible and are judged according to their actions (cf. Acts 2:23).
One of the clearest passages on divine sovereignty and human responsibility is found in Romans 9 which affirms that God has created vessels of wrath and vessels of mercy (Rom 9:22–23), yet man is still answerable to God (Rom 9:19–20).

Scripturally, man is clearly answerable for his actions before God. This is a consequence of God’s supreme authority over mankind and his role as judge of human conduct.
God has created man in his image (Gen 1:27–28) and commands him to “be holy, for I am holy” (Lev 11:44; cf. 19:2; Matt 5:48; 1 Peter 1:15–16). Man then is responsible to live according to God’s holy standards and is held responsible for every word, thought, and deed; whether they be acts of commission or acts of omission (Jas 4:17).
In this sense of responsibility—the creature under the creator—man is always and totally responsible. This sense of responsibility and the creator-creature distinction must be at the fore of any biblical discussion on the nature of divine sovereignty and human responsibility. As creatures of God, man’s foremost responsibility is to recognize his creatureliness and glorify his Creator.

From a human standpoint, ignorance of God’s decree leaves man responsible for his actions, even though they have been predetermined by God.

Like responsibility and ability, freedom entails a number of senses that must be considered. First, unlike the proponents of contra-causal or libertarian freedom, the biblical witness is clear that mankind is in bondage and is not free. Man is in bondage to sin and does not have the freedom to do what is good (Rom 8:7; 6:15–23; John 8:34; 2 Cor 3:17). Christ is the one who is able to set man free from this bondage (John 8:34–36). This is the most important kind of freedom that is mentioned in Scripture—the freedom from sin given to man by the work of Christ.32 That man is in bondage to sin and not free to do good does not remove the fact that he is a creature subject to moral evaluation from God. Being subject to moral evaluation (i.e., answerable) to God makes humans morally responsible.

The complex relationship between divine sovereignty and human responsibility necessitates a multi-faceted solution. Responsibility, freedom, ability, and the nature and outworking of God’s decree must all be properly understood and grounded in biblical truth in order to understand how mankind is held responsible for sin in a world predetermined by God. While the solution presented above may not explain exactly how God works all things according to the counsel of his will, it does demonstrate why man is responsible for his actions. God decrees all that comes to pass for his own glory. This includes justly punishing the wicked and redeeming unworthy sinners. He is to be praised for both acts. Humanity is responsible to submit to this great God