Egyptian culture pervaded ancient Israel years after Moses led the Exodus, artifacts recently unearthed during the excavation of a cave in the South reveal. The Antiquities Authority announced the find on Wednesday, two days before Passover.

While displaying the relics at Jerusalem’s Rockefeller Museum, archeologists said that hundreds of pottery vessels and dozens of pieces of jewelry dating to the Late Bronze Age (1500 BCE) and Iron Age (1000 BCE) had been found during a looting investigation in the Tel Halif region.

“Inspectors from the Robbery Prevention Unit discovered that antiquity thieves had broken into the cave and begun looting pottery vessels from 3,000 years ago, and disturbing the ancient archeological strata,” Antiquities Authority spokeswoman Yoli Shwartz said. Authority officials “thwarted further damage to the cave and carried out a salvage excavation there, in order to save the artifacts and extremely valuable archeological information from the robbers’ pickaxes.” 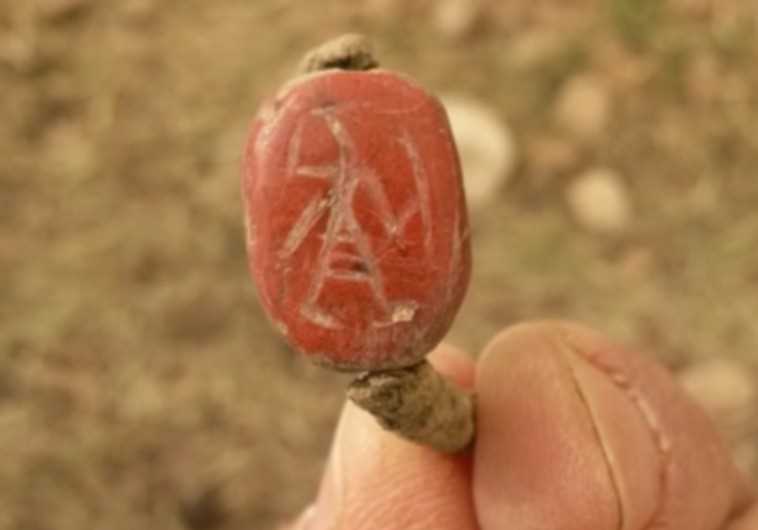 Shwartz said more than 300 pottery vessels of differ-varieties, “fashioned from yellowish alabaster, seals, seal impressions and cosmetic vessels” had been found in the cave. Some were still intact. Dozens of pieces of jewelry made of bronze, shells and faience were also found nearby.

Amir Ganor, director of the Robbery Prevention Unit, said that many of the artifacts discovered attest to the existence of an Egyptian administrative center in the region 3,400 years ago.

“We found dozens of stone seals, some of which are shaped in the form of a winged beetle [scarabs] and bear carved symbols, and images typical of the Egyptian culture which prevailed in the country in the Late Bronze Age,” Ganor said.

“It is true the Israelites left Egypt, but the evidence from the excavation in the cave shows the Egyptians did not leave the Israelites and their descendants,” he added. “Some of the seals were fashioned on semiprecious stones that come from Egypt and the Sinai Peninsula.”

Dr. Daphna Ben-Tor, curator of Egyptian archeology at the Israel Museum, said most of the scarab seals found in the excavation date to the 15th and 14th centuries BCE, during which Canaan was ruled by Egypt.

“The names of kings appeared on some of the seals. Among other things, we can identify a sphinx lying opposite the name of the pharaoh Thutmose, who reigned from about 1504– 1450 BCE,” Ben-Tor said.

“Another scarab seal bears the name of Amenhotep, who reigned from about 1386–1349 BCE,” she continued.

“Still another scarab depicts Ptah, the principal god of the city of Memphis.”

Other artifacts discovered included seal rings made of faience, and a number of figurines and amulets in the image of gods sacred to the Egyptian culture.

“This has been attested to in archeological excavations where we uncovered evidence from many years after the Exodus, which reflects the influence of Egyptian culture on the Judahite residents of the country.”

An examination of the antiquities showed that some of the objects had been made in Egypt and were brought to Canaan by the Israelites or merchants, Ganor said. He added, however, that other artifacts had been made in ancient Israel using methods imitating Egyptian techniques and cultural motifs while utilizing indigenous raw materials.

According to the authority’s Dr. Amir Golani, during the Late Bronze Age, Egypt was an extremely powerful empire and imposed its far-reaching authority throughout the region.

“Egyptian authority was not only manifested in political and military control, but was a strong cultural influence that contributed to shaping society,” Golani said. “Along with an administration of Egyptian officials in Israel, a group of the local elite evolved in the country who adopted many of the Egyptian customs and their artistry.”

The artifacts have been transferred to Antiquities Authority laboratories for further treatment and analysis, Golani added.

“The investigation of the cave and the finds is still in its early stages, and upon completing the treatment of the hundreds of objects that were exposed, it will be possible to add important information regarding Egypt’s influence on the population of the Land of Israel in the biblical period,” he said.

Ganor expressed satisfaction that the attempted theft had been thwarted, saving hundreds of invaluable relics from being lost to the black market.

“These findings were saved from plundering and looting, and archeologists were able to carry out a systematic study of the site that will provide very valuable information for understanding the culture of the country in antiquity,” he said.